Jefferson Davis was born in Kentucky on June 3, 1808. When he was about seven years old and living in Mississippi, he was sent to a boarding school in Kentucky run by Dominican friars from England. On one occasion he took the blame for a student prank by students older than he was. During part of his education he was the only non-Catholic in the school. He once raised the issue of conversion to Catholicism with the Prior, who apparently felt Davis was too young to make such a decision.

Arlington County has asked the Commonwealth of Virginia to rename the Jefferson Davis Highway in Arlington.

When he was thirteen he was graduated from a high school in Washington, Mississippi named Jefferson College. After study at Transylvania College in Lexington, Kentucky, he entered West Point at the age of sixteen.

After West Point he served with distinction in the Indian Wars. His first wife, Sarah Knox Taylor, the daughter of Zachary Taylor, died at the age of twenty-one. In 1845, Davis married his second wife, Varina, and was elected to Congress. President Davis and Varina had six children, three of whom died in childhood.

In 1847, after heroic service as a colonel under the command of Zachary Taylor in the Mexican War, including the Battle of Buena Vista, in which he was seriously injured, Colonel Davis entered the United States Senate on crutches.

In 1853, Senator Davis was appointed Secretary of War. He served in that capacity with distinction until he returned to the Senate in 1857, when James Buchanan replaced Franklin Pierce as President.

In 1860, the Democrat and Whig parties were both hopelessly divided. A coalition of abolitionists, free soil Whigs, anti-Southerners, anti-saloon activists, and anti-Catholics elected Abraham Lincoln as a minority President. By February 1861 seven Southern states had left the Union and Jefferson Davis had been unanimously elected temporary president of the new Confederate States of America. President Davis immediately sent commissioners to try to negotiate peace with the North – but Lincoln prevented any negotiations.

By February 1861 seven Southern states had left the Union and Jefferson Davis had been unanimously elected temporary president of the new Confederate States of America. President Davis immediately sent commissioners to try to negotiate peace with the North – but Lincoln prevented any negotiations.

The South suffered multiple divisions over policy during the War for Southern Independence. In 1864 the South began to lose critical battles and Lincoln began to become popular in the North. Lincoln’s re-election in 1864 foreclosed the possibility of a negotiated settlement with the North and after Lee’s surrender, President Davis was taken prisoner by the Northern army in May 1865. Jefferson Davis and Varina had an African American baby they had adopted with them, who was taken by soldiers of the Northern army. The Davises were never allowed to know what happened to their baby.

About two weeks later, President Davis was imprisoned in Fortress Monroe, Virginia and Varina was told that she was not free to leave the city limits of Savannah, Georgia. Shortly after his capture, the Northern army put heavy shackles on him. This sparked such outrage that after five days the shackles were removed. His eyesight was destroyed by keeping a light on all night in his cell. He was not allowed to see or communicate with his wife, and his doctor was not allowed to answer her letters. He was deliberately kept awake every night by soldiers walking loudly back and forth outside his cell. 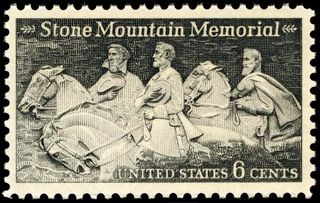 This commemorative stamp, issued in 1970, shows the Stone Mountain Memorial, the gigantic sculpture carved into a Georgia mountain measuring 76 by 158 feet. It honors the three Confederate leaders of the War between the States, Jefferson Davis, Stonewall Jackson, and Robert E. Lee, and their favorite horses, Blackjack, Traveller, and Little Sorrel.

Gradually and slowly, he was permitted to have medical care. His doctors managed to restore his health. His main doctor, Dr. John J. Craven, published a book called “The Prison Life of Jefferson Davis.” The book brought to wide public attention for the first time the Northern army’s shocking abuse and maltreatment of President Jefferson Davis. The public was outraged.

While he was still incarcerated, a grand jury in Richmond indicted him for treason. Eventually, Varina was allowed to move into the fort where he was held.

Pope Pius IX sent President Davis a large autographed photograph, the first photograph ever autographed by a pope for anyone not a member of a royal family. During the war, Pius IX had been the only head of state who addressed a letter to Davis as “President.”

Generations of Southerners loved Jefferson Davis, probably much more for his suffering at the hands of the victorious North than for his political and military accomplishments. As a nation we are now forgetting all this and taking his name off of schools and streets.

Two years after his capture, President Davis’s lawyers managed to get a writ of habeas corpus from the court in Richmond where the treason charges were pending. The Northern army was forced to bring Davis into court. The judge ruled that Davis was no longer a prisoner of the Army but now a civilian prisoner. In the meantime President Johnson and Secretary Stanton had finally been persuaded that continued imprisonment or killing of Davis would be politically disastrous. The judge set bail at $200,000. A number of prominent and wealthy New Yorkers were in the court. They posted the bail and he was immediately released.

Four Southern states were ruled by three Northern generals and one Northern colonel, who had no love for the South or intention of living there in the long run. One of these states was South Carolina. When a book was published describing the corrupt Northern army military rule in that state, opinion in the North began to turn sharply against all of the injustices inflicted on the South. 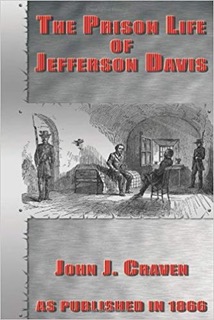 Dr. John Craven’s book caused a huge public outcry when the shocking abuse and maltreatment of Jefferson Davis was brought to light.

Mississippi was ruled by Adelbert Ames, a New England general. When Ames saw Davis walking on the street in Mississippi he apparently began to realize that the days of Northern rule in Mississippi were numbered. When military rule in the South collapsed completely, Governor Ames resigned and fled to avoid impeachment.

Born a Baptist, Davis loved the Episcopal, Catholic, and Methodist churches far more than the Baptist church. He was an Episcopalian almost half of his life, but he was known to wear Catholic devotional items such as medals and scapulars.

Another indication of his pro-Catholic sentiments was exhibited in President Davis’s well-received eloquent letter of condolence to America’s Catholics on the death of Pope Pius IX in 1878.

Generations of Southerners loved him, probably much more for his suffering at the hands of the victorious North than for his political and military accomplishments. As a nation we are now forgetting all this and taking his name off of schools and streets. We must pray to God that this amnesia does not make us accomplices of his military captors and torturers.

Copyright © 2019 by the Fitzgerald Griffin Foundation. All rights reserved. This article may be reprinted if credit is given to Charles G. Mills and fgfBooks.com.

Charles G. Mills, author of The Confederate Lawyer, is the Judge Advocate Emeritus (general counsel) for the New York State American Legion. As a New York lawyer, he argued cases for fifty years in federal courts and in all levels of the New York courts.

Help the Fitzgerald Griffin Foundation in its mission to publish the writings of Charles G. Mills and other great writers. Give a tax-deductible donation to FGF online.