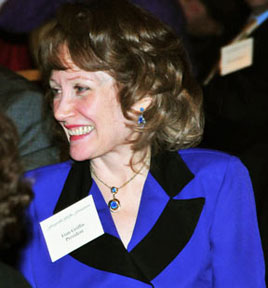 Are You Wondering about Hate, Love, and Smear Tactics?

The Southern Poverty Law Center has labelled the Fitzgerald Griffin Foundation as a "hate group," as they hate our mission to preserve Western civilization and its core, Christianity. Our mission is not to hate but to discuss the fundamental principles of our culture and society. FGF is offended with the charge, and that anyone could believe that ideas discussed on this site could be designated as hateful. See the helpful links below to learn more about the SPLC.

November 12, 2021
Announcing our Latest Book: Harley Price’s Give Speech A Chance: Heretical Essays on What You Can’t Say or Even Think

December 31, 2018
It's New Year's Eve: Will you help FGF expand our publishing of forthright authors?

Fran Griffin is president of the Fitzgerald Griffin Foundation, which she founded in 2003. Prior to founding FGF, she served numerous Christian and conservative organizations as an event manager and publisher, writer, editor, and publicist through her public relations firm, Griffin Communications. In addition she is the Chief Executive Officer Finance Business Forms Company, founded by her father, Daniel Griffin, in 1947.

Mrs. Griffin was born and raised in Chicago. She has a B.A. from Rosary College (now Dominican University) and an M.A. in Political Science from the University of Chicago. She was a talk show host on WYCA-AM (Hammond, Indiana) for three years. She also was a candidate for Illinois State Senate and the Illinois chairman of Young Americans for Freedom.

She came to Washington, D.C. to work as legislative assistant to Congressman Tom Corcoran (R-IL), and later went to work as Media Director for the American Conservative Union when Congressman Phil Crane (R-IL) was chairman. She left ACU to take a position in the Reagan for President campaign in 1979 and, after his election, headed up a transition team on the Corporation for Public Broadcasting (The team recommended that CPB be abolished).

From 1994 to 2007, Griffin Communications published Joe Sobran’s monthly newsletter, Sobran’s the Real News of the Month. The inspiration for Fitzgerald Griffin Foundation occurred during this time. FGF was founded in 2003 as a non-profit organization dedicated to promoting to the ideas of a free society, to defending the family, to one man-one woman marriage, and to the sanctity of life from conception to natural death.

Mrs. Griffin manages and facilitates the publication of the Fitzgerald Griffin Foundation’s books, essays, and columns. The latest FGF book is Give Speech A Chance: Heretical Essays on What You Can’t Say or Even Think by Harley Price. Mrs. Griffin wrote the Foreword to the book.

Mrs. Frances Margaret of Castello Griffin, T.O.P., is a perpetually-professed member of the Third Order of St. Dominic, the lay branch of the Order of Preachers (Dominican Order). She serves on the Board of Directors of the Marriage and Family Recovery Programs. Because of her dedication to bring the truth of Christ to the world, in her spare time she works as a catechist of the Catechesis of the Good Shepherd, a Montessori-inspired faith formation program for children. She is also an active pro-lifer with Defend Life, the largest pro-life organization in the Washington, D.C. Metro area.

Mrs. Griffin is available for speaking engagements on various topics, including America’s culture war, pro-family and pro-life issues, and the life and legacies of Joe Sobran and Samuel Francis. Contact her at publisher@fgfbooks.com for more information.